Bronze Pelican Emblem
The Bronze Pelican Emblem is a local diocesan recognition established by the Catholic Committee on Scouting. It may be presented to any adult working in the scouting program under Catholic auspices, to Catholics in units not partnered by the Church and to those who have made a significant contribution to Scouting in the field of Catholic relationships. It may be given to clergy, religious, laity or Scouters of other faiths.
For Nomination Form:  CLICK HERE 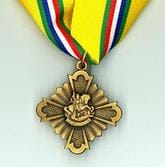 St. George Emblem
The National Catholic Committee on Scouting, acting through the local diocese or eparchy, may award the St. George emblem to members of the laity and clergy, Scouters and non-Scouters alike, who have made significant and outstanding contributions to the spiritual development of Catholic youths through Scouting.
The recipients of the emblem are to be sought after and selected by an active committee of the (arch) diocese/eparchy. This committee is to be newly-appointed each year by the diocesan Scout chaplain or chairman.
Nomination forms should give a detailed description of how the nominee provides outstanding contribution to the spiritual development of Catholic youths through Scouting in the Catholic Church. It is improper to nominate oneself or one's immediate family members.